Of course, he’s a muslim, he lies. 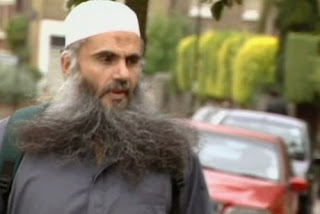 Islamist cleric Abu Qatada has pleaded not guilty to terrorism charges pressed by Jordanian military prosecutors just hours after his deportation from Britain, his lawyer says.

Britain's expulsion of the Palestinian-born preacher after a decade-long legal battle drew expressions of delight from prime minister David Cameron.

Qatada, who had been in and out of British prisons since 2002 even though he was never convicted of any offence, had once been described as Osama bin Laden's right-hand man in Europe.

"I will appeal [on Monday] to the [state security] court to release him on bail," he added.

The cleric was taken to the courthouse near Marka military airfield in east Amman just hours after he was flown in from Britain.

"He was remanded in judicial custody for 15 days in the Muwaqqar prison," in eastern Jordan, he added.

Reporters were not allowed into the courtroom to hear the charges being read out despite a pledge by information minister Mohammad Momani of "transparency" in Jordan's handling of Qatada's retrial.

Qatada was condemned to death in absentia in 1999 for conspiracy to carry out terror attacks, including on the American school in Amman, but the sentence was immediately commuted to life imprisonment with hard labour.

In 2000, he was sentenced in his absence to 15 years for plotting to carry out terror attacks on tourists in Jordan during millennium celebrations.

Jordanian law gives him the right to a retrial with him present in the dock.

Mr Cameron hailed the final removal of Qatada from British soil after a legal battle that cost the taxpayer $2.5 million.

"I was absolutely delighted. This is something this government said it would get done, and we have got it done," Mr Cameron told reporters.

"It's an issue that, like the rest of the country, has made my blood boil."

Britain was finally able to expel the 53-year-old father-of-five to Jordan after the two governments last month ratified a Treaty on Mutual Legal Assistance in Criminal Matters, guaranteeing that evidence obtained by torture would not be used in his retrial.

The Jordanian information minister reiterated the undertaking on Sunday.

"His retrial will be conducted in line with international standards, protecting his rights and ensuring justice, fairness, credibility and transparency," Mr Momani told the state-run Petra news agency.

A security official told AFP that after his arrival "a team of doctors including the state coroner examined the suspect and made sure there were no signs of torture."

London had been trying to deport Qatada since 2005 but British and European courts had blocked his expulsion on the grounds that evidence might be used against him that had been obtained by torture.

But after years of legal battles his lawyers unexpectedly said in May that he would return once the fair trial treaty was ratified by the Jordanian parliament.

He was taken from prison in an armoured police van to a military airfield on the outskirts of London, from which he was flown out.

Qatada's wife and five children are expected to remain in Britain, where he first sought asylum in 1993.