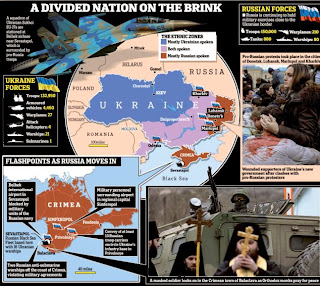 Back in the days when British schools taught history and poetry properly, every child knew about the Charge of the Light Brigade. The epitome of military foolishness, when the flower of the British cavalry attacked Russia’s  artillery batteries in the Battle of Balaclava in 1854.

The blundering diplomacy which caused that war is less well known. Alfred, Lord Tennyson, whose poem immortalised the fiasco, would have struggled to versify the complex Anglo-French attempts to shore up the Ottoman empire, amid an obscure squabble about religious privileges in the Holy Land.

The Crimea, setting for that most infamous calamity, is a peninsula with a blood-soaked and tragic history. Long contested by the great powers, it has been the crucible of many wars. Now it threatens to be the flashpoint for another one.

The Crimea has long been contested by the powers and has been the crucible of many wars, Lucas writes

Indeed, broadly speaking, the issues that led Queen Victoria’s government to dispatch an army are eerily similar today. Once again, a wider struggle between a resurgent Russian empire and its fragile neighbours is being played out in the streets of this long-neglected province.

Few may know or care about the intricacies of the region’s history – the long-forgotten Scythians, or the mighty Crimean Tartar Khanate, which ruled the northern Black Sea region for three centuries until it came under Russian rule in 1783.

But what is becoming blindingly clear is that on Crimea’s fate hangs Ukraine’s. And on Ukraine’s fate depends the whole edifice of European security, built up since the collapse of the Soviet Empire in 1991.

Crimea in the modern age has rarely determined its own future. For a few months following the Bolshevik Revolution, the indigenous Tartars, freed from the yoke of Tsarist rule, enjoyed a brief period of independence – a laudable but doomed attempt to establish a secular, modern-minded Muslim state.

For four brutal and chaotic years, control of this scenic sliver of land flip-flopped between German, Ukrainian, Bolshevik and ‘White’ (monarchist) Russian forces.

But under Soviet rule from 1921, communism was ruthlessly enforced. Like their Ukrainian neighbours to the north, Crimea’s Tartars were a particular object of Stalin’s wrath for their ‘bourgeois-nationalist’ outlook, foreign ties, and pious peasant values.

A deliberately engineered famine in the 1930s killed millions, amid heart-breaking suffering and grotesque scenes of cannibalism.

When Hitler attacked the Soviet Union in 1941, Crimean Tartars and Ukrainians, like many others who had experienced the horror of Soviet rule, believed life could only be better under their new Nazi masters. They were to pay cruelly for that deluded choice.

The peninsula was the scene of some of the fiercest battles of the Second World War. The Germans wrested control from the Soviets in 1942, only to be driven out by the Red Army in 1944.

Stalin’s revenge on the Tartars – only weeks later – stirs bitter resentment to this day. Nearly 200,000 people, mainly old men, women and children, were given 30 minutes to pack, and were deported to the wastes of Central Asia. Nearly half of them died, many from hunger, thirst and exposure.

'Putin’s Russia has seized Crimea under our noses. The dismemberment of Ukraine is under way.'

Their descendants returned to Crimea as Soviet rule loosened. They found the place names changed, their cemeteries obliterated, and their houses occupied by strangers. In four decades, the Soviet Union had wiped out centuries of history. The new majority of the inhabitants of Crimea were Russians – mainly military veterans fiercely loyal to the Kremlin.

Which is why the Tartars are now a minority in their own land, living in poverty in makeshift encampments, lacking compensation, land, jobs or even recognition of their suffering. For them, the only hope of justice is a strong and successful Ukraine; their nightmare is a return to Kremlin rule. For the Russians in Crimea, the Tartars are  despicable traitors. These Russians also care little for Ukraine – for understandable reasons.

In a strange quirk of history, Soviet leader Nikita Khrushchev transferred Crimea from Russia to Ukraine in 1954. But it meant little. Russia, Ukraine and the other Soviet Socialist Republics were of only nominal importance: real power lay with the Kremlin, the Communist Party and the KGB.

When that system collapsed in 1991, though, Khrushchev’s impetuous decision meant that Crimea was part of a newly independent state. The Tartars were jubilant, but the Russians living on the peninsula were bemused and sceptical. The new leaders of Ukraine trod cautiously. Russian was and is spoken freely in the east and south of the country.

Ukraine could be a success story, its leaders reckoned – a place like Switzerland or Belgium, where different languages, religions and cultures exist side-by-side. But only if outsiders refrained from meddling. To ensure that, they struck a deal with Britain, America and Russia to guarantee their country’s borders, and its freedom from threats or coercion. In the Budapest Memorandum of 1994, Ukraine agreed to give up its share of the Soviet nuclear arsenal, in return for solemn pledges regarding its security.

Nobody then could have foreseen that a quiet ex-KGB officer in St Petersburg, burning with resentment at the collapse of the Soviet Union, would one day come to power in the Kremlin and seek to restore its lost realms.

But since Vladimir Putin’s rise to power, Russia has systematically undermined Ukraine’s security, with a mixture of blackmail over energy supplies, economic sanctions and subversion. It has not been hard: Ukraine is woefully ill-run and corrupt. Western efforts to help have been haphazard and ineffective. Our promises in that accord of 20 years ago have proven shamefully hollow – no more effective than the ones we made to protect Belgium in 1914 or Poland in 1939.

Now we are reaping the harvest of our cowardice and complacency. Putin’s Russia has seized Crimea under our noses. The dismemberment of Ukraine is under way. The security arrangements which have kept Europe peaceful and prosperous since 1991 are perishing in Crimea right now – just as much of the Light Brigade did 160 years ago.