Gay, lesbian troops perform in drag at Okinawa Air Base 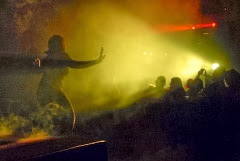 Colored spotlights and fog set the mood as a U.S. servicemember performs in drag during a fundraiser Saturday at Kadena Air Base to support lesbian, gay, bisexual and transgender troops.

KADENA AIR BASE, Okinawa — Since the repeal of the Don’t Ask, Don’t Tell policy, U.S. military bases have hosted a gay marriage ceremonies and a potluck gatherings. But on Saturday, servicemembers here may have been the first to take to the stage and perform as drag queens on a military installation in support of lesbian, gay, bisexual and transgender troops.

Drag queens and drag kings, to be precise.

Six servicemembers — gay, lesbian and straight — donned heavy makeup to dance and lip sync songs such as “I Wanna Dance with Somebody” for a raucous capacity crowd at the Rocker NCO Club at Kadena Air Base. The event was a fundraiser for the recently formed Okinawa chapter of OutServe-SLDN, which is the largest nonprofit advocate for the military’s LGBT community.

“We didn’t think there was much of a desire for an event like this on the island but it has actually blown up,” said Navy Lt. Marissa Greene, co-chapter leader of OutServe Okinawa.

Greene said she had hoped to sell about 75 tickets to fund some future support activities for the group, which was formed last summer and still “starting from scratch.” The event was approved as a “variety show” by Kadena’s 18th Wing through the same process as other on-base fundraisers.

But an initial 200 tickets were plucked up almost immediately, so they issued another 200.

Amid the unexpected success, OutServe carefully avoided any mention of politics, but its variety show comes at a pivotal time for gay civil rights in the United States, with many states passing laws dealing with marriage or debating individual liberties.

It is also a sign of the times within the military; just a few years ago, gay and lesbian drag performances on a military base would have been unthinkable and potentially a cause for dismissal from the service.

The repeals of Don’t Ask, Don’t Tell, as well as the Defense of Marriage Act — the law barring the federal government from recognizing same-sex marriages — have allowed gays and lesbians in the military to be open with their sexuality for the first time.

The historic shift appears to be mostly accepted and embraced throughout the ranks despite warnings the DADT repeal could harm order and good discipline.

The advocacy group agreed to avoid using the term “drag show” as part of its on-base fundraiser effort.

Tech. Sgt. Kristen Baker, who was among the crowd, said the show got a warm reception and would leave a mark for civil rights.

“Everything is just accepted. It makes me really proud to watch it,” Baker said. In the military, “we are all brothers and sisters no matter what.”