Putin Hints That He May Not Stop at Crimea

Putin Hints That He May Not Stop at Crimea 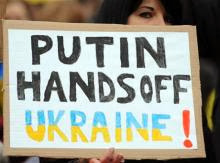 A demonstrator outside the Russian embassy in Berlin, Germany on Sunday March 2, 2014. (AP Photo/dpa,Britta Pedersen)

(CNSNews.com) – During his 90-minute phone conversation with President Obama on Saturday, Russian President Vladimir Putin hinted that Russian military intervention in Ukraine could go beyond Crimea, the region now under effectively occupied by Russia.

That’s according to the Kremlin’s brief account of the phone call, initiated by Obama.

“Vladimir Putin stressed that in case of any further spread of violence to Eastern Ukraine and Crimea, Russia retains the right to protect its interests and the Russian-speaking population of those areas,” it said.

Roughly one-third of Ukraine as a whole is considered Russia-leaning, an area about ten times bigger than Crimea. Those are the regions where a majority voted for the pro-Russian Viktor Yanukovich – now former president – in the 2010 election, and where most first-language Russian speakers live.

In key cities in those areas, pro-Russian demonstrators rallied on Saturday, denouncing the new Western-leaning government in Kiev and calling on Moscow to intervene. Russia’s RIA Novosti news agency said Russian flags were flying over local government buildings in Kharkhiv, Donetsk and Odessa, among other eastern cities.

The Kremlin readout of the phone call said Putin had drawn Obama’s “attention to the provocative and criminal actions on the part of ultra-nationalists who are in fact being supported by the current authorities in Kiev.”

“The Russian president spoke of a real threat to the lives and health of Russian citizens and the many compatriots who are currently on Ukrainian territory,” it said.

“Vladimir Putin noted that in case of any escalation of violence against the Russian-speaking population of the eastern regions of Ukraine and Crimea, Russia would not be able to stay away and would resort to whatever measures are necessary in compliance with international law,” his office said in a statement.

The White House readout of the Obama-Putin call made reference to other parts of Ukraine, too.

“The United States calls on Russia to de-escalate tensions by withdrawing its forces back to bases in Crimea and to refrain from any interference elsewhere in Ukraine,” it said.

“We have consistently said that we recognize Russia’s deep historic and cultural ties to Ukraine and the need to protect the rights of ethnic Russian and minority populations within Ukraine.  The Ukrainian government has made clear its commitment to protect the rights of all Ukrainians and to abide by Ukraine’s international commitments, and we will continue to urge them to do so.” 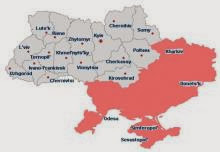 Most first-language Russian speakers in Ukraine live in the south and east of the country, regions which in the 2010 election strongly supported the pro-Russian candidate, ousted former President Viktor Yanukovich. (CNSNews.com map/Ukraine 2010 census data)

Moscow has accused the new Kiev authorities of discriminating against ethnic Russians, pointing to the swift abolition of a 2012 law that had enabled Ukrainian regions where more than 10 percent of the population speak Russian to declare Russia a second official language.

Russia’s border guard agency reported on Sunday that more than 140,000 Ukrainians had crossed the border into Russia over the past fortnight, figures which some Russian media reports said lent substance to Putin’s expression of concern for the safety of Russians in Ukraine.

In a teleconference briefing Sunday, one of three senior administration officials speaking on condition of anonymity said that Obama in the phone call had “flatly rejected President Putin’s arguments with regard to his rationale for moving his military into Crimea, including the illegitimacy of the government in Kiev and his assertion that Russian citizens or his – or the [Russian navy] base in Sevastopol were under direct threat.”

The official said there were reports of “occasional ethnic skirmishes in parts of the east,” while in Kharkhiv “there have been efforts to stir up ethnic Russians and Russian citizens in protest to the government.”

Asked whether Russian troops or paramilitary were behind the incitement, the official said, “We have not seen Russian military moves in the east of Ukraine [outside of Crimea] at this stage, at this point in time, but we’re watching very carefully.”

The official did voice concern that armed conflict could erupt.

“There is a very proud and fierce tradition in Ukraine of defending their sovereignty and territorial integrity. So far, Ukraine has showed and Ukrainians individually have showed marked restraint, notably led by the government, which has insisted that its own forces stay in barracks. But the longer this situation goes on, the more delicate it becomes.”