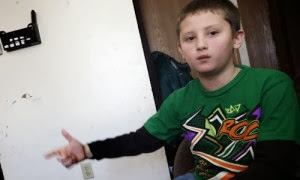 A Columbus principal suspended a student for three days last week after the child pointed a "lookalike firearm" at another student in class and pretended to shoot.

The boy's age? 10. The "level 2 lookalike firearm" cited in his suspension letter? His finger.

"I was just playing around," said Nathan Entingh, a fifth-grader at Devonshire Alternative Elementary School in a far northern section of the district. "People play around like this a lot at my school."

Other kids have been caught playing pretend gun games on the playground at Devonshire and weren't suspended, Nathan said.

Devonshire Principal Patricia Price has warned students about pretend gun play numerous times this year, and everyone should know the rules by now, district spokesman Jeff Warner said. Nathan put his finger to the side of the other student's head and pretended to shoot "kind of execution style," Warner said.

"The kids were told, 'If you don't stop doing this type of stuff, there would be consequences,'??" Warner said. "It's just been escalating." Warnings included three newsletters sent home with kids, he said.

The boy's father, Paul Entingh, said no one felt threatened, and it's the adults who are acting childish in their response to a typical 10-year-old's misstep.

"He said he was playing," Paul Entingh said. "It would even make more sense maybe if he brought a plastic gun that looked like a real gun or something, but it was his finger."

The other student didn't even see the offense -- a teacher witnessed the hand gesture, both sides agree.

Nathan has never been in trouble before at school, and a three-day suspension is overboard, his father said. "I would have even been fine with them doing an in-school suspension."

Since so-called zero-tolerance policies on guns and drugs swept the nation after the Columbine shootings in the mid-1990s, Columbus City Schools has had several similar incidents:

--In 1999, an elementary principal pressed criminal charges against an 8-year-old boy who she said assaulted her by flailing, kicking and screaming during a temper tantrum. A juvenile court judge dismissed the charge, saying the boy was too young to have had "criminal intent."

--In 2000, a second-grader was suspended for two days at Huy Elementary School on the North Side for wielding a gun he had drawn on paper and cut out.

--In 2009, a 14-year-old Northland High School student faced a one-year expulsion after he fired a Nerf foam-dart gun at school. The district settled for a suspension instead.

State Sen. Charleta Tavares, a Columbus Democrat, has proposed legislation that would overturn a 1998 state law requiring schools to adopt zero-tolerance policies. Her plan would force schools to remove those policies and forbid them in the future because she said they lead to unfair punishments.

Last year, when she introduced her bill, which would reserve suspensions and expulsions for only serious incidents, Tavares highlighted the suspension of an 8-year-old Maryland boy who chewed a Pop-Tart into a gun shape this year. "A gun-shaped edible snack is not a weapon," Tavares said

"Many of us on both sides of the aisle want to find something that will give school administrators flexibility so they can be reasonable, remain safe and keep students in school," she said yesterday.

The Senate's education committee is continuing to hold hearings on the bill, she said.

Meanwhile, Nathan reflected on his suspension yesterday: "I was thinking it was dumb."