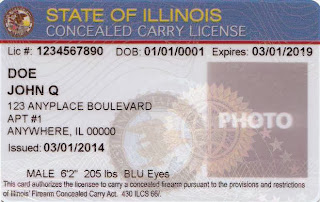 A sample concealed-carry card, provided by the Illinois State Police.

Illinois' first concealed-carry gun permits -- roughly 5,000 of them -- are going out in the mail, State Police announced Friday.

At a news conference in Chicago, State Police officials announced that the state's first batch of licenses was being printed and mailed Friday.

Plenty more licenses remain to be processed. So far, more than 50,000 Illinoisans have submitted applications for concealed-carry permits.

The number of permits issued to metro-east residents was not available Friday.

The first licenses likely will go to the earliest applicants: firearms instructors and others who submitted electronic fingerprints ahead of the official Jan. 5 launch of the online application process. The early applicants were part of a program to "beta test" the capacity of the system, said State Police Col. Marc Maton.

As of Friday, 300 applications had been denied. In addition, local police agencies have objected to about 800 applications, and those remain under review.

Maton said, "This collaborative process offers the multiple layers of scrutiny envisioned by the legislature, and we believe that the law enforcement objections provide for enhanced public safety."

Applicants who are rejected can appeal to a review board. The seven-member review board, appointd by Gov. Pat Quinn, consists of federal prosecutors, judges and FBI agents. So far, no appeals have been made to the review board.

At the news conference, officials offered a glimpse of what the actual permits look like. The ID-type cards have a photo of the licensee and are approximately 2 inches by 3 inches, with a State Police hologram.

After a court struck down Illinois' ban on carrying concealed guns in public, state lawmakers in July approved a concealed-carry bill, making Illinois the last U.S. state to allow the practice. Since then, State Police have been working to launch the program, which involved setting up rules and procedures, as well as accepting applications and screening applications.

Those who are 21 or older, have a valid Firearm Owners Identification Card, complete a 16-hour training course and pass a background check can obtain a concealed carry permit for a fee. The five-year permits cost $150 for residents and $300 for nonresidents.

The law bans carrying concealed firearms in places such as schools, child-care facilities, courthouses, public transportation, college and professional sports stadiums and in establishments where alcohol sales make up more than 50 percent of a business's receipts.

Illinois lawmakers have projected that there would be 350,000 to 400,000 applications for concealed carry permits in the first year of the law.

Applications for permits are processed and approved by State Police. A local sheriff or police chief can object to an application. Applicants who are rejected can appeal to a review board.