(This has long been one of my primary concerns. Due to the amelioration of sanctions, Iran will be able to pay North Korea more than previously and increase their cooperation. North Korea needs the money and will be pleased to oblige. — DM)

Measure Iran’s nuclear weapons progress by looking at North Korea. History has shown that when one advances, so does the other. 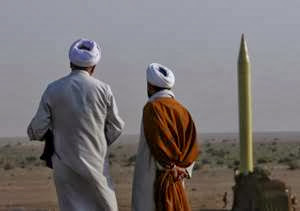 Iranians view a test of a surface-surface missile. (Photo: © Reuters)

The West is expecting North Korea to soon conduct its fourth nuclear test and to launch a long-range ballistic missile in retaliation for joint U.S.-South Korean military exercises.

How does Iran fit into this equation?

The two rogue states share their technology and Iranian scientists have been reported at every single North Korean nuclear test. The Iranian Shahab-3 ballistic missile is modelled after North Korea’s No-Dong missile. It is not a coincidence that, according to Director of National Intelligence Clapper, North Korea is increasing its nuclear program at the exact same time as Iran is slowing its nuclear program down.

Intelligence analyst Ilana Freedman reports that her sources say that Iran began moving its nuclear bomb production capabilities to North Korea at the end of 2012. This was around the same time that Iran was cleansing its Parchin base after U.N. inspectors found strong evidence that they had carried out tests for developing nuclear missiles there. Iran still refuses to grant inspectors access to the site.

Freedman’s sources say that Iran has outsourced its nuclear weapons research to two sites in North Korea near Nyongbyon, which is where U.S. intelligence confirms a uranium enrichment facility is being expanded. They say that Iran has been providing the raw uranium for the site. A second site about 15 miles north is where work on nuclear warheads is progressing. According to her sources, there are 250-300 Iranian scientists in North Korea protected by a group of Revolutionary Guards personnel and 14 warheads have already been produced there.

We shouldn’t be confident that the U.S. government would detect secret work like this, because the U.S. government itself isn’t confident: A three-year study by the Defense Department concludedearlier this year that U.S. intelligence capabilities against secret nuclear activities is “either inadequate, or, more often, do not exist.”

If Iran has outsourced its work to North Korea, it wouldn’t be an anomaly. In fact, the dual nature of North Korea and Iran’s programs has long been reported on. A former senior official in Germany’s Defense Ministry says that some intelligence officials believe that at least one North Korean nuclear test was done on behalf of Iran.

Iranian scientists were reportedly on the scene for North Korea’s most recent nuclear test last year. There is evidence that Iran sponsored the test with millions of dollars in Chinese currency. Iran’s top nuclear scientist, Dr. Mohsen Fakhrizadeh, was present. He is believed to be the manager of Iran’s efforts to develop nuclear triggers and warheads.

In 2012, Iran’s company that produces ballistic missiles and satellitessent a delegation of a dozen representatives to North Korea to watch its long-range ballistic missile test. The test failed.

If Iran is willing to pay, North Korea is willing to sell. It has no moral qualms about selling deadly technology to a radical Islamic regime, and the cash-strapped regime wouldn’t have much of a choice if it did.

The Iranians spend an estimated $2 billion on North Korean arms every year. The actual number may be even higher.  A top Iranian defector revealed that Iran paid North Korea $1-2 billion to build a nuclear reactor in Syria that was ultimately bombed by Israel in 2007. North Korean defectors say that 40% of the country’s exports are arms sales.

Western analysts mistakenly view the Iranian and North Korean weapons of mass destruction programs as separate. Yet, history has shown that when one advances, so does the other.

If you want to measure Iran’s nuclear weapons progress, look at North Korea.