"A bump in the road"....remember that calloused statement?

This certainly puts this administration in the right perspective.

I don't know the author of this poem … Very thought provoking and poignant. I do recall, however, the President referring to the Benghazi incident as "a bump in the road." Today I heard an ex-Navy Seal being interviewed on Fox News regarding a book he has written about how to handle crisis situations in our lives. At the end of the interview he asked if he could make a comment on Benghazi and of course the anchor said yes. He then thanked Fox News for keeping the Benghazi story in the news since other news organizations are not. He said the Seals who died deserve the public knowing the truth about the whole affair.

The poem was written by a MARINE CORPS Officer (ANON). 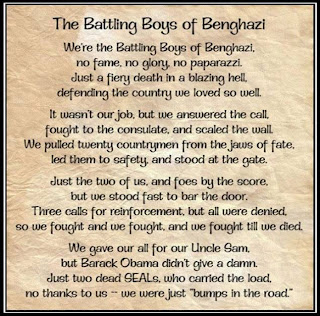 This email needs to be circulated as much as we can possibly keep it going. I think this is the feeling of the general population and it should be pursued until something is done with the incompetent ass holes involved which literally sit there in the White house and watched their execution on live streaming video and did absolutely nothing!

I contend that for a nation to try to tax itself into prosperity is like a man standing in a bucket and trying to lift himself up by the handle. – Winston Churchill