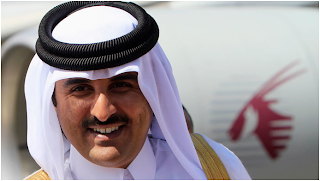 Doha’s bite can be felt hard in the foreign policy arena, particularly in Syria, where it has been the principle arms supplier to the Al-Qaeda-linked militants fighting Assad. How will Qatar policies shift as the Gulf’s youngest leader takes the throne?

If we judge leaders by their cutthroat survivalist credentials, Qatar’s outgoing Emir Sheikh Hamad bin Khalifa Al Thani is arguably the political equivalent of Bear Grylls. The deep-pocketed monarch came to power in 1995 after overthrowing his own father in a palace coup while the latter was vacationing in Switzerland, and promptly altered the kingdom’s economic policies, giving rise to a boom in the development of natural gas and rapid economic development.

Qataris, part of a citizen population of fewer than 250,000 people, went from living in Bedouin tents scattered across the searing desert landscape to futuristic glass skyscrapers that dominate the capital, Doha, after the gas-boom; they pay no taxes and receive free or highly - subsidized social services. Qatar has amassed enormous material wealth since Hamad took the throne; its economy has grown from $8 billion in 1995 to over $174 billion, but now he’s passing the torch down to his 33-year-old son, Tamim bin Hamad al Thani, who officially inherited power on June 25.

It may be a pint-sized nation, but the billions Qatar has invested into global prestige projects over the past two decades has undeniably put this tiny peninsula on the map. The elder Hamad is the principle financier of the Al Jazeera news network, and it’s pretty transparent how Qatar’s foreign policy influences the network’s coverage of Iran, Libya and Syria, despite the station’s best efforts to ensure its impartiality.

It would be awfully difficult to find anything published on Al Jazeera that is critical of Qatar or the emir, and that’s probably because the kingdom has some of the world’s harshest provisions on free speech – namely, a media law that prohibits criticism of Qatar or any state in the Gulf Cooperation Council. Despite the West’s endorsement of the Arab Spring protests, criticism was remarkably muted when police recently arrested a poet in Qatar who made vague criticisms of the royal establishment – and after a bit of international pressure, his sentence was reduced from life in prison to just 15 years. (Hamad, your reformist credentials are really showing!) 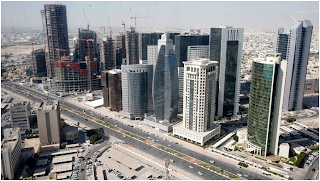 Political parties are banned in Qatar, there are no elections, the Emir has absolute authority, and - wait for it - they “promote democracy” in Syria! The kingdom is a primary sponsor of the armed opposition in Syria, as well as the suit’n’ties in the Syrian National Council; it played a critical role in the brutal regime change operation in Libya, and has lent support to jihadists in Mali. Al Jazeera’s Arabic service plays host to a range of hardline voices, such as Yusuf al-Qaradawi, the spiritual leader of the Muslim Brotherhood who famously called for Muammar Gaddafi’s assassination and claimed that the Prophet Mohammed would support NATO if he were around today.

Qatar is of course a key US ally and partner, and hosts the Pentagon’s most important military bases in the region, in addition to hosting 5,500 US troops. President Obama described Hamad as “a pretty influential guy,” and when asked about the blatant hypocrisy of an absolute monarch exporting democracy around West Asia, he insinuated that Qatar’s six figure per capita income dampens the Qatari people’s democratic sentiments.

In an effort to improve national education, Hamad pushed for high-end American universities to open up shop in Doha, which also hosts an arm of the Brooking Institute, an influential US think-tank that champions aggressive foreign policy directions that show little concern for international law and national sovereignty.

Qatar has long been a small fish among whales, contending with a hegemonic Pentagon, a reactionary and fanatical Saudi Arabia next door, and Shiite anti-monarchy Iran a stone’s throw away. The emir’s total embrace of Washington, his billion dollar prestige projects, and his support of the Muslim Brotherhood and their jihadist foot soldiers stem from Qatar’s ambitions of regional economic and political dominance, as well as taking the route it perceives to be the surest bet for regime security in a hostile neighborhood. Even Qatar’s modest globalized liberalization (women can drive in Qatar) has itself emerged out of the emir’s clear understanding that he has to at least attempt to look liberal and in keeping with the times.

Western media often downplays Doha’s lack of democracy, but talk up its attempts to broker diplomatic settlements to international conflicts, which have yielded little fruit. 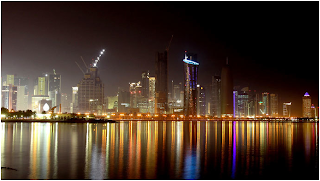 There seems to be an underlying economic component to Doha’s moves on the global chessboard, especially with regard to Syria. Qatar gets its gas from the South Pars field, which it shares with Iran, and as global demand for clean energy rises, so do Doha’s ambitions of being the EU’s main supplier.

If Europe shifts to burning gas instead of coal to reduce CO2 emissions, it could potentially become the largest natural gas consumer. Doha wants direct transit routes to emerging EU markets, but Assad is in the way, and he agreed to participate in the proposed Iran-Iraq-Syria gas pipeline, which would significantly bolster anti-hegemony Shia states and essentially allow Tehran, which is selling the same product, to get a leg-up over Doha. Of course, Qatar never seems to be seriously criticized in Western capitals, despite it being a strong candidate for the ‘state-sponsor of terror’ label that it should rightfully wear. 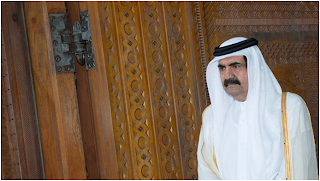 To his credit, the elder emir oversaw a highly stable regime and did much to raise living standards drastically and, more notably, he has turned his ambitions into reality through calculated risk-taking – an unlikely attribute for an Arab monarch. In stark contrast to Saudi Arabia, where all the princes slated to take the throne are in their 80s and 90s, the new emir is the world’s second-youngest leader, just ahead of North Korea’s Kim Jong-un.

Emir Tamim bin Hamad al Thani and the new generation of leaders he will appoint have inherited a medieval political system with a globalized face; he is said to have been heavily involved in shaping Qatar’s policy toward the conflicts in Libya and Syria.

Qatar’s previous emir was one of the loudest voices calling for troops to be sent to Syria, and he even started paying the salaries of anti-Assad fighters – there’s no way his son would shift gears. The young emir is not facing any real criticism in the West, nor any real domestic opposition, but perhaps he could plausibly find himself facing nasty blowback from Doha’s foreign policy choices, which would be the only significant hindrance he may face.

The country is going to keep being a favorite customer of the US defense industry, the question is, will Tamim deepen Qatar’s role in the Syrian conflict? As the US and others prepare to overtly provide arms to militants in Syria, Doha can definitely be expected to move more vigorously in step with Washington.

The statements, views and opinions expressed in this column are solely those of the author and do not necessarily represent those of RT.