[thereby illustrating the need for great intel, and the ability to occupy the high ground. - T.] 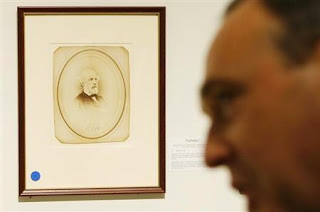 (Reuters) - Confederate General Robert E. Lee was "virtually blind" to the superior positions held by Union troops hidden by rolling hills and valleys, which contributed to his downfall at the pivotal battle of Gettysburg in the American Civil War, researchers said on Friday.

Lee's ill-fated combat decisions and ultimate defeat likely stemmed from bad reconnaissance reports, his forces spread too thinly across 7 miles, and an inability to see the more compact and elevated Union forces, according to geographers and cartographers who synthesized old maps, text and data into a digital model of the three-day Pennsylvania battle in 1863.

"We know that Confederate General Robert E. Lee was virtually blind at Gettysburg," Anne Kelly Knowles, a geography professor at Middlebury College, wrote in the article accompanying the interactive map on smithsonianmag.com.

"Altogether, our mapping reveals that Lee never had a clear view of enemy forces ... In addition, Lee did not grasp - or acknowledge - just how advantageous the Union's position was," Knowles wrote.

This week marks the 150th anniversary of Gettysburg, which took place over July 1-3 and claimed roughly 50,000 soldiers from the North and South.

It is regarded a crucial turning point in the bloodiest war in U.S. history that preserved the United States as a single country and led to the abolition of slavery. Roughly 620,000 Americans died.

On July 2, 1863, the second day of battle, Lee decided to launch an attack against a vulnerable patch of Yankee resistance around a pair of hills to the South - called the Round Tops.

But he failed to see thousands of Union troops that had gathered during the night and lurked in the vicinity. Union General Governor K. Warren spotted the advance and summoned reinforcements.

"Realizing the limits of what Lee could see makes his decisions appear even bolder, and more likely to fail, than we knew," she wrote.

The Confederate defeat at Vicksburg, Mississippi, came a day after Gettysburg. Lee ultimately surrendered in Virginia in 1865.