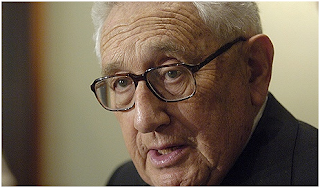 Syria is a constant source of bad news for the US and its allies, who are keen to arm and finance the terrorists who are trying to overthrow the legitimate government of Bashar Assad. Speaking at the Ford School, former secretary of state Henry Kissinger commented on the current Syrian situation, expressing his preference for a broken-up and balkanized Syria to emerge after the civil war.

Henry Kissinger admitted that the seeds of Syrian conflict were planted by the West during the colonial era. "First of all, Syria is not a historic state. It was created in its present shape in 1920, and it was given that shape in order to facilitate the control of the country by France, which happened to be after UN mandate. The neighboring country Iraq was also given an odd shape that was to facilitate control by England. And the shape of both of the countries was designed to make it hard for either of them to dominate the region", he explained.

After describing the roots of the conflict, the former secretary of state outlined the real nature of the war in Syria, pointing out that it is a sectarian war and not a war for democracy. Henry Kissinger showed no remorse for the American support of the terrorists but was clearly saddened by the military victories of the Syrian army.

In his view, the US can no longer hope for a decisive victory and liquidation of the Syrian government. However, Henry Kissinger believes that Syria can be split into several regions and that such a scenario is the best outcome for America: "There are three possible outcomes. An Assad victory. A Sunni victory. Or an outcome in which the various nationalities agree to co-exist together but in more or less autonomous regions, so that they can't oppress each other. That's the outcome I would prefer to see. But that's not the popular view."

This statement made by one of the most influential American strategists shows that Bashar Assad is very close to victory and the US is trying to propose a compromise because it is clear that the original plan to overthrow the Syrian government has failed. Mr. Kissinger is a bit late with his proposal. Last year, when Assad was losing the war, it could have been accept. Now, when Assad's forces are winning, no one will agree to split Syria into several enclaves.