What Happens When Benevolent Totalitarianism Ceases To Be Benevolent? 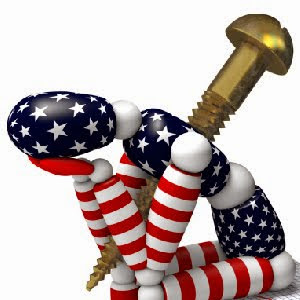 What Happens When Benevolent Totalitarianism Ceases To Be Benevolent?

That America is a fascist Nation is no longer deniable. Fascism, as described by Benito Mussolini, is the merger of state and corporate power. All significant legislation passed in recent years has been designed to either increase the power of the state to control the people, to increase the power and wealth of corporations or to strengthen their symbiotic relationship. As legislation that accomplishes these things is detrimental to the best interests of the people, it can be described only as salvos being fired against the people and in violation of the U.S. Constitution.

America was designed as a representative republic, with Representatives elected by the people to represent their interests when laws are passed. Senators were to be selected by the States to represent the interests of their States. Neither the Congress nor the President is answerable to the people or the States today. They answer only to their corporate sugar daddies and NGOs (non-governmental organizations) that operate behind the scenes. These NGOs, dominated by monied interests, include, but are not limited to, the Federal Reserve, The Trilateral Commission, the Council on Foreign Relations and various and sundry “think tanks” propped up by the same corporate sugar daddies lining the pockets of Congress.

The names of the people running and funding these NGOs are mostly familiar and pop up from time to time in various ways in government and out: appearing in Presidential cabinets, heading alphabet soup government agencies, sitting on the boards of corporations, running the World Bank, etc. Theirs are the corporations that receive the contracts for government business as it makes war on other countries, move in to rape and pillage the natural resources of Third World countries (see The Secret History of American Empire and Confessions of an Economic Hit Man, both by John Perkins) or fulfill the mandates of legislation (insurance, Big Pharma, Goldman Sachs, JPMorgan Chase, etc.).

In 2008, against the wishes of the majority of America, George W. Bush pushed through the Troubled Asset Relief Program (TARP), a $700 billion boondoggle of largess to bail out the banksters and their criminal co-conspirators on Wall Street. To sell it, Bush employed classic Orwellian doublethink saying, “I’ve abandoned free market principles to save the free market system.”

Opposition to this criminal transfer of wealth from the middle class to the wealthy bankster criminals — whose illegal activity combined with Federal Reserve money printing caused the collapse — spawned the Tea Party movement. And Bush’s legacy, such as it was, was swept into the dustbin filled with 20th century progressive/socialist Presidents like Woodrow Wilson, Herbert Hoover, Franklin Roosevelt, Lyndon Johnson and Richard Nixon.

The tragically misnamed Patient Protection and Affordable Care Act was likewise passed against the wishes of the American people. Then-Speaker of the House Nancy Pelosi mockingly told us we would have to wait until it was passed to find out what’s in it. As bad as the Obamacare deathcare system looked then, it looks even worse now that we’re on the cusp of its implementation.

Obamacare is more doublethink. Passed under the guise of providing healthcare insurance for everyone, it served only to benefit and profit Big Insurance and Big Pharma to the detriment of small business and the American worker. A majority of Americans remain opposed to it, and opposition continues to grow; yet there is no move by unaccountable Congress to remove the blight of Obamacare. Meanwhile, Health and Human Services Secretary Kathleen Sebilius is strong-arming companies that will benefit from the Obamacare deathcare trap into contributing to the marketing of the byzantine boondoggle.

Now we know that the Internal Revenue Service, which is nothing more than a blunt instrument used to cudgel American workers and small businesses as it transfers wealth and creates dossiers on all “taxpayers,” is targeting Americans based on their opposition to big government. And this monstrosity will have full access to the supposedly private medical records of all Americans.

Revelations of the hyper-Orwellian spying system reveal even more government/business symbiosis. Government and Big Business are sharing the electronic data of Americans so that nothing is private: not phone calls, not text messages, not emails, not associations. But the spying is not limited to the hoi polloi. A warrant, which at least gave the face of legitimacy to this unConstitutional activity, is no longer even needed. Judges are giving wide latitude to the data collectors.

Whistle-blowers now claim the spying extends to judges (including Foreign Intelligence Surveillance Court judges who approve the warrants), Supreme Court justices, the elected class, military brass and high-ranking government functionaries. The data collected is such that the intelligence community could essentially blackmail everyone in government. It’s coup in the making.

The Senate Gang of Thugs is pushing a bill to give amnesty to 11 million or more illegal aliens. This, too, goes against the wishes of a majority of Americans. Yet those elected to “represent” Americans are again ignoring the will of the people. The amnesty bill has nothing to do with helping the illegals gain legal status. It is a bill designed to provide to businesses millions of workers content with slave wages and to provide unions millions of prospective dues-paying slaves. The fact that it will turn America into a Third World backwater, drive up unemployment — particularly among blacks and the poor — and drive down wages across the board is irrelevant to the psychopathic criminal class inhabiting the Nation’s cesspool.

There is a crackdown on what’s left of the free press and anyone who would consider blowing the whistle on government corruption. The Edward Snowden narrative doesn’t pass the smell test, so there is something deeper going on than the story we’re given.

Yet the message to potential whistle-blowers is clear: Reveal anything and your life is over. You will be branded a traitor or worse. Your family will suffer. And, members of the press: You, too, will be called traitors simply because you did your job and reported on government corruption. Your 1st Amendment rights have been stripped away. And get too close to the truth and there are serious consequences, as Michael Hastings learned.

Hastings, the reporter whose stories brought down Gen. Stanley McChrystal, died in a suspicious fiery one-car accident last week. When he died, he was reportedly working on a story about the CIA and had told WikiLeaks that he was being investigated by the FBI.

History shows that as regimes begin to fail they become more onerous, more aggressive and finally more violent toward their own citizens. The American system is in a state of collapse. The signs are obvious to those who are aware. I hope you are prepared.

Bob Livingston is an ultra-conservative American who has been writing a newsletter since 1969. Bob has devoted much of his life to research and the quest for truth on a variety of subjects. Bob specializes in health issues such as nutritional supplements and alternatives to drugs, as well as issues of privacy (both personal and financial), asset protection and the preservation of freedom.