By: Teodorovic Milos and  Ron Synovitz 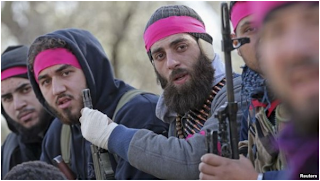 SOVI PAZAR, Serbia — Eldar Kundakovic was fighting to free Syrian rebels from prison in May when he was killed by a hand grenade.

Unlike most militants battling Syrian President Bashar al-Assad’s regime, he was not from Syria or a nearby Arab country.

His death notice, posted on the Internet by Syrian rebels, calls attention to a growing trend: young Muslims from the Balkans are traveling to Syria to join the rebel cause.

RFE/RL has received confirmation that the journey from the Balkans to the Middle East has been made by Muslims from Serbia, Montenegro, Bosnia-Herzegovina, Macedonia, Kosovo, and Albania.

Compared to thousands of Lebanese Shi’ite Hizballah militants bolstering Assad’s forces, the number of Balkan fighters with Syrian rebels is small — no more than several hundred.

Salafist leaders in the Balkans deny recruiting or transporting Balkan militants to Syria. They say those who join Syrian rebels do so as individuals.

But Resad Plojovic, deputy leader of Sandzak’s muftiate, told RFE/RL he thinks “some organizations and individuals” are recruiting Balkan Muslims.

“There are centers or individuals who probably have connections with certain organizations, and they are motivating people,” he says. “They also may know ways to transport them to the war zone. Let’s be frank. Many here do not even know where Syria is. They cannot know how to go there and get involved in all that is happening there.”

‘Radicalized Before Going To Syria’

Kundakovic’s father told RFE/RL that he last spoke with his son by telephone when he crossed into Syria from Turkey in late March.

Esad Kundakovic says his son immediately joined a rebel unit with about 30 fighters from Sandzak.

According to Mina Jovicic, a friend of Kundakovic in Novi Pazar, the young man was radicalized before going to Syria.

“He entered religion abruptly and then he started attending lectures and hanging out with people who talked about it often,” she said.

Anel Grbovic is a journalist from Novi Pazar who was Kundakovic’s high-school classmate.

He maintains that most jihadists from Sandzak distanced themselves from Serbia’s two official Islamic communities before traveling to Syria.

In Kosovo and Macedonia, militants who have fought alongside Syrian rebels told RFE/RL that they wanted to help “Sunni brothers” fight Assad’s regime.

One fighter from Macedonia said he hooked up with Syrian rebels via an intermediary in Vienna.

Suspicion falls upon Salafists as recruiters because Salafism is the root-ideology of Al-Qaeda and its affiliates — including the rebel Al-Nusra Front in Syria, which is considered a terrorist group by Washington.

Bosnia-Herzegovina has the strongest Salafist presence in the Balkans due to aid and investments by Saudi Arabians who are members of the fundamentalist sect.

Tellingly, many Bosnian fighters in Syria have joined the Al-Nusra Front.

Relatives of those Bosnians claim that Nusret Imamovic, the leader of the predominantly Salafist Bosnian village of Gornja Maoca, was their recruiter. Imamovic refuses to be interviewed about the allegations.

Salafists established themselves in Bosnia-Herzegovina during the 1992-1995 Balkan conflict when foreign jihadists arrived to help Bosnian Muslims fight against Serb and Bosnian-Serb forces.

Some foreign Salafist fighters stayed in Bosnia after the war. Financial support for reconstruction also poured in from Saudi Salafists, strengthening their Balkan foothold.

Goran Zubac, director of the Bosnian State Investigation and Protection Agency, claims his office has questioned at least eight men linked to the organized transport of Bosnians to Syria and insists his office is closely monitoring Salafists.

“If our priority is to fight against terrorism and these activities are a part of this sector, then you can rest assured that nobody in the State Investigation and Protection Agency is sleeping,” he said.