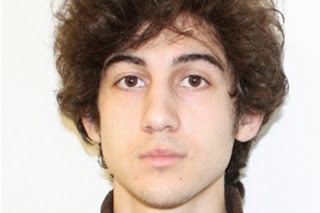 Dzhokhar Tsarnaev, 19, has been indicted on 30 counts related to the Boston marathon bombing and its aftermath (Picture: Reuters)

Boston marathon terror suspect Dzhokhar Tsarnaev learned to make bombs by downloading an al-Qaeda magazine from the internet, it was revealed during his federal indictment.

The 19-year-old also gathered Islamic jihad and martyrdom material online and wrote anti-American messages inside a boat where he lay injured in a shoot-out with police before his arrest.

Days before he and his brother Tamerlan allegedly set off two bombs at the marathon on April 15, he downloaded the summer 2010 issue of Inspire – an English-language magazine published by al-Qaida, it was claimed.

The magazine contained details on how to make bombs from pressure cookers – the type used in the Boston attacks – with explosive powder from fireworks and lethal shrapnel.

Tsarnaev is also believed to have read extremist Muslim literature, including 'Defense of the Muslim Lands, the First Obligation After Imam', which advocates 'violence designed to terrorize the perceived enemies of Islam', the indictment said.

Tsarnaev, whose older brother Tamerlan died while fleeing police in the days after the attack, also scrawled anti-US messages on a boat as he hid from police in Watertown, west of Boston. 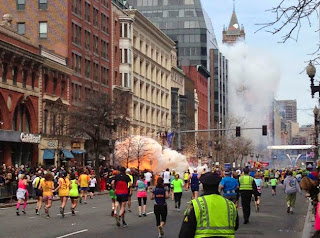 He wrote: 'The US government is killing our innocent civilians', 'I can't stand to see such evil go unpunished' and 'We Muslims are one body, you hurt one you hurt us all'.

The charges also show how Tamerlan bought 48 mortar shells from a Seabrook, New Hampshire, fireworks store and used the Internet to order electronic parts for the bombs.

Suffolk District Attorney Daniel Conley said: 'Tamerlan Tsarnaev's justice will be in the next world but, for his brother, accountability will begin right here in the district of Massachusetts.'

Tsarnaev's 30-count indictment includes the murder of four people and bombing a place of public use.

Three people were killed and more than 260 wounded when two bombs exploded near the finish line of the 26.2-mile race.

Tsarnaev's charges also cover the death of Massachusetts Institute of Technology police officer Sean Collier, who was allegedly shot in the head by the brothers, who had roots in the Russian regions of Dagestan and Chechnya.

Attorney general Eric Holder will decide whether to pursue the death penalty against Tsarnaev.