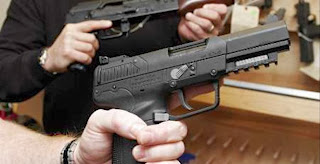 I am continually amazed how many of the very agents in charge of enforcing America's gun laws at the Bureau of Alcohol Tobacco and Firearms are completely reckless with guns. Further, it's incredible how good they are at losing guns as a result of irresponsible or careless behavior. The Milwaukee Journal Sentinel is out with a new report showing ATF agents lost dozens of their loaded government issued handguns, one of which was found by children (paging Diane Sawyer at ABC News):

ATF agents have lost track of dozens of government-issued guns, after stashing them under the front seats in their cars, in glove compartments or simply leaving them on top of their vehicles and driving away, according to internal reports from the past five years obtained by the Milwaukee Journal Sentinel.

Agents left their guns behind in bathroom stalls, at a hospital, outside a movie theater and on a plane, according to the records, obtained Tuesday by the news organization under the federal Freedom of Information Act.

In December 2009, two 6-year-old boys spotted an agent's loaded ATF Smith & Wesson .357 on a storm sewer grate in Bettendorf, Iowa. The agent lived nearby and later said he couldn't find his gun for days but didn't bother reporting it — until it hit the local newspaper.

In Los Angeles in 2011, an agent went out to a bar drinking with other agents and friends, reportedly consuming four alcoholic beverages. The next morning he woke up and realized his ATF-issued Glock was gone. It was not found.

Unreal. A loaded handgun spotted by kids thanks to careless placement? Drinking while carrying a firearm in a restaurant establishment? That's illegal. In fact, carrying a gun into a bar is illegal in most states, including California. Oh and what's this? It wasn't just handguns that were lost or stolen but long guns too? Terrific.

Most of the lost weapons were handguns, but there also were at least two assault rifles stolen. Typically the reports do not indicate what happened to the unrecovered guns. However, in a November 2008 incident, the gun may have wound up in Mexico, according to the report.

Last year the Journal Sentinel found ATF had lost a fully-automatic machine gun on the streets of Milwaukee. In early 2011, shortly after Border Patrol Agent Brian Terry was killed, we found out the Bureau allowed more than 2500 firearms to be trafficked from the United States and into Mexico for use by brutal Mexican cartels. How do these incidents keep happening? Because there is never any real accountability or consequences for these actions, so they continue.

At the end of 2013, the Obama administration announced new goals for legislation requiring lost or stolen guns to be reported. They should start with ATF. It is completely asinine that the very same agency responsible for enforcing gun laws is full of agents constantly breaking those laws and losing firearms.