What are the limits on carrying a gun outside the home? 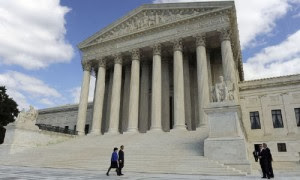 What are the limits on carrying a gun outside the home?

John Drake just wants to legally carry a gun to defend himself in New Jersey since he has been chased by robbers after refilling ATMs with thousands of dollars in cash. His application for a concealed carry permit was denied because the state does not consider self- defense a "justifiable need."

Mr. Drake is taking his case all the way to the Supreme Court. If the high court decides to hear it, the ruling could change the laws related to the individual's right to bear arms from coast to coast.

After retiring from Sprint, Mr. Drake decided to buy 50 ATMs to put in stores, some of which are in high-crime areas. He generally carries about $30,000 in $20 bills to fill up 10 machines at one time. He was sneaking the cash under his shirt and racing in and out of the stores but has still been pursued by criminals to his car three times.

In 2010, the lifelong gun owner and hunter decided to go through all the requirements for a permit to defend himself while on the job. The state rejected the application, stating that Mr. Drake "failed to establish that an urgent necessity for self protection as evidenced by prior specific threats or previous attacks demonstrating a special danger to your life."

Mr. Drake told me in an interview that, "If the New Jersey state police application reviewers used good old common sense, they'd have seen it was pretty obvious I had 'justifiable need' for a permit. But they are saying 'no' to just about everybody who applies."

He's right. New Jersey has a population of 7 million, but fewer than about 1,200 people have carry permits - and that includes retired law enforcement and armored car drivers.

He filed suit, backed by the Second Amendment Foundation - whose attorney Alan Gura is representing him - and a co-plaintiff, the Association of New Jersey Rifle & Pistol Clubs.

Mr. Drake said that public awareness of this case really took off about two weeks ago when the National Rifle Association (NRA) filed an amicus curiae brief with the Supreme Court in support of Drake v. Jerejian.

The case also got national attention when 34 members of Congress and 19 state attorneys general jumped in this month, writing to the court that "significant splits of authority have developed" in state and federal courts in determining allowable limitations to having a gun outside the home.

Most recently, the 9th U.S. Circuit Court of Appeals overturned San Diego's extremely restrictive carry-permit process. Mr. Gura filed a supplemental brief with the Supreme Court on Tuesday to highlight the decision in Peruta v. San Diego to strike down California's "good cause" requirement. The lawyer wrote that the ruling made clear that, "Excluding the constitutional self-defense interest from the 'good cause' required to carry handguns does not merely burden the Second Amendment right, but 'destroys' it."

In addition, the 7th Circuit ruled in December 2012 that the total ban on carry in Illinois was unconstitutional, which forced the legislature to rewrite the law.

On the flip side, five appeals courts have ruled that the citizens have to justify essentially a life or death need to carry a gun, including the 4th Circuit for Maryland, the 2nd Circuit for New York and, of course, the 3rd Circuit for New Jersey.

There are currently eight states that are considered "may issue" - which means a permit applicant has to prove a pressing need to carry a firearm outside the home - including Maryland, New York and California. (The District of Columbia does not allow anyone to carry a gun outside the home, except the bad guys.) In practice, it is virtually impossible to get a concealed carry permit in these states.

On Monday, the Supreme Court declined to consider two NRA cases, one of which (NRA v. McCraw) would have presented an opportunity to rule on carry rights. However, many legal experts believe the court will take a case on this issue at some point, as a split among the circuit courts continues to develop.

Alan Gottlieb is the founder of the Second Amendment Foundation. "I think, no matter what, that now the odds are really in our favor for them to hear Drake," he told me. "The California ruling and the Richards case, which the 9th Circuit will also rule our way any day now, creates a really big split that can't be ignored." (Richards v. Prieto is another California carry case that Mr. Gottlieb's organization filed against Yolo County that the 9th Circuit heard on the same day as the San Diego case.)

While Mr. Drake originally sued for himself, he has become more motivated by the principle. "Look, I could get rid of the machines or move to Pennsylvania. But it ain't right that we have to prove a need," he explained. "States can change speed limits or taxes, but there are certain inalienable rights in the amendments that should not be abridged. It should be the same rule everywhere in the country."

The Supreme Court will likely decide by summer if it will take up Drake in the fall session. It's time for the justices to insist that American citizens in all 50 states and D.C. have the fundamental right to carry guns outside the home for self-defense without arbitrary restrictions set by anti-gun politicians.