In Which We Do Our Best to Explain the U.S. Navy's New Battle Plan

In Which We Do Our Best to Explain the U.S. Navy’s New Battle Plan

A little Q and A on Air Sea Battle

What the Hell is Air Sea Battle?

A new concept for winning a war in the Pacific against a large, hostile peer competitor. In other words, a battle plan for beating China. Under Air Sea Battle, the United States would breach China’s defenses, surging ships, subs, planes and Marines into places Beijing doesn’t want the U.S. to go. Places like the South China, East China and Yellow Seas.

And why exactly is this necessary?

China is a—arguably the—major military power in the Western Pacific. The Chinese Communist Party is an authoritarian regime and, in many ways, ideologically opposed to the things many Americans believe.

And although Beijing doesn’t appear to actually want a direct confrontation with the U.S., China grows increasingly assertive in a number of territorial disputes involving America’s friends and allies in the region.

China is deploying weapons specifically designed to destroy America’s own weapons—ballistic missiles for hitting U.S. aircraft carriers, for instance. These weapons could create big no-go zones in the Pacific for the Pentagon. We call this “anti-access area denial.”

Some Americans worry that if the U.S. doesn’t specifically counter these no-go zones, China might just decide it can do whatever it wants everywhere. 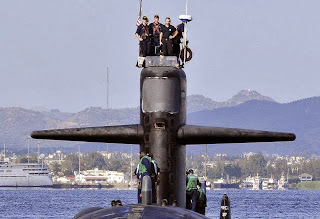 America has been fighting “small wars” in Iraq, Afghanistan, The Philippines, Somalia and Yemen for more than a decade. These occupations, counter-insurgency campaigns and counter-terrorism operations have mostly required ground troops, Special Operations Forces, tactical air power and drones.

But that stuff doesn’t necessarily work in a big war against a high-tech foe. Air Sea Battle is supposed to shift our thinking, redirecting our attention from grinding ground wars and commando raids to complex, dangerous maneuvers in the air, sea, space and “cyber” realms—a.k.a., the Internet.

Is Air Sea Battle really all that new?

In the 1980s, the Army and Air Force took a hard look across the German border at massive Warsaw Pact armies. Hugely outnumbered by the Soviets’ tanks and infantry, the Americans realized they needed to be ready to fight smarter.

Their solution was something called Air Land Battle, a concept for closely blending Army divisions and Air Force fighter wings to find, fix and destroy Warsaw Pact troops. It was an early example of what we now call “jointness.” Air Sea Battle updates jointness for the Pacific. Instead of the Air Force and Army, it mostly blends the Air Force, Marines and especially the Navy. But the Army could play, too.

Are we ready for Air Sea Battle?

Between the Navy, Air Force and Marines, the Pentagon already has most of the basic equipment. But China’s defenses get better every year—and could improve ever faster thanks in part to the looming threat of ... Air Sea Battle. But we digress.

There are things the military would like to buy in order to do the job better. The Air Force wants more F-35 stealth fighter-bombers and the new, stealthy Long Range Strike Bomber, still on the drawing board. The Navy and Marines want more destroyers, submarines, P-8 patrol planes and drones that can launch from aircraft carriers.

If the U.S. and China ever actually go to war, both sides have already lost, regardless of who “wins.” A shooting war between the world’s two biggest economies would be financially and ecologically devastating for everyone on Earth. The only way Air Sea Battle actually works is if it deters conflict.

“Offshore control” is a competing idea, in which air and naval forces surround China just outside of Beijing’s main defensive zone and basically strangle the Chinese economy by blocking imports and exports.

For offshore control to work, America would need to swiftly destroy China’s long-range forces and then maintain an expensive, complicated air and sea blockade. With minimal destruction on the Chinese mainland, the Chinese Communist Party could call a cease fire with minimal embarrassment.

At least that’s the theory.

Proponents of offshore control say their concept is easier to walk back than Air Sea Battle is—and would be less likely to escalate into, oh, World War III. It would be cheaper, they say. 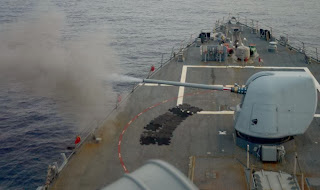 When does an Air Sea Battle conflict end?

That’s a good question—and one that Air Sea Battle advocates haven’t articulated very well. At some point after the Chinese navy is rusting away on the seafloor, the Chinese air force is all shot down, the power is out in Shanghai and toilets won’t flush in Nanjing, the Chinese are supposed to figure out that they’ve been beaten … and just give up.

Then again, they might be too pissed off to simply surrender.

What does China think about Air Sea Battle?

It’s impolite to say so, but yes, Air Sea Battle does involve bombing China. If the Pentagon wants to destroy Beijing’s long-range defensive weapons, it’s going to have to go after stuff on like radars, runways and ballistic missiles. And also maybe the electrical grid that powers those weapons and facilities. And while we’re at it, the command bunkers where generals and admirals orchestrate the battle. And so on.

The most obvious role for the Army is manning the ground-based air defense of U.S. and allied bases in and around Japan, Okinawa and Guam. The Army’s Patriot and THAAD missiles can defend against aircraft, cruise missiles and ballistic rockets.

Admittedly, that’s not very sexy. Terrified of being left out, the Army’s looking for new roles. Like island assault, for instance.

What role would our Asian allies play in Air Sea Battle?

Nobody outside the Pentagon knows. Our allies don’t know. It’s a problem