"Then he went over them like a razor over hair and ran like locusts over a green crop."

The city was overrun. The streets ran with blood; the piled dead reached the top of the walls, forming a ramp for the invaders; the many slaves of the city broke down the gates in their mad headlong flight; all the accumulated treasure of generations was carried off by the victorious men of the steppe; the Jews of the city were herded into their synagogues and slaughtered to the last man; the young women were raped, and a pyramid of some twenty thousand skulls was erected outside the city, as a mute testimony to Timur's terrible vengeance.
-The Battle of Aleppo
Everything2.com

While Syria has faded deeper into the pages of daily newspapers, Syrians are no longer the lead in television news; and their pivotal conflicts cannot be ignored. The nation has long been at the crossroads of east and west, and now finds itself a pawn of an assortment of powers. Unfortunately, for its citizens, the nation doesn't have the kind of oil that Libya possesses. 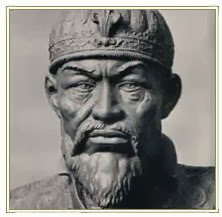 There have been no grand proclamations of not allowing a leader to slaughter his people. More than 100,000 deaths and counting, and the destruction of a people that have dared to demand a democratic nation continues. Once again, history repeats itself.

As the Renaissance was beginning, 1416 saw the Battle of Aleppo, which brought terror and destruction that has become legendary. Timur the Lame was born into a tribe of horsemen in what is modern-day Uzbekistan, whose military skills were employed by an ambitious Emir, who was soon removed from leadership by Timur.

His conquest covered lands from Egypt to India, having passed before fulfilling his dream of conquering China.

His fighting techniques were legendary, including camping outside Aleppo for two days, strategically positioning his forces. All of the citizens of Aleppo, which included Arabs, Kurds, Turkomans, as well as women and children joined the battle, but were rutted within an hour. Using a technique that feigned retreat, Timur was able to open a path for the army of the Sultan and corrupt their lines. An Italian merchant living in Syria recounted the scene, and how the trapped troops were routed. Timur, a Shia saw himself as a true successor to the caliphate.

Today, Aleppo stands in ruins in a scene that could make Timur blush. 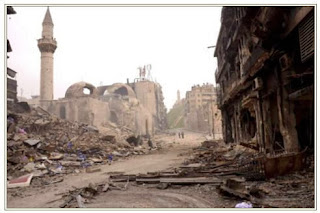 Bashir Assad has taken a page from his father's ruthless crackdown on descent, and from Timur's intimidation factors, he would look like he's winning.

His promise of ditching chemical weapons seems to have been a ruse to buy time, and a free pass to use any other form of destruction.

If the devastation can be contained within the border of Syria, the rest of the world including the so-called policemen of the world, and the United States would seem content to let the smoke rise, and an odor of roasted flesh linger.

Timur stayed in Aleppo a month after his victory, and sacked the city of Damascus before moving on;"leaving the blackened and vulture-haunted ruins" behind him.

The world of Timur seems so remote and impossible to see again, but the one constant in the history of mankind is that history repeats itself. Sure, it was easier for lawless tribal bands in a rural corner of the planet to spread terror and conquest throughout the world, but there will be leaders in the future also with a desire to rule the world. With America's military being whittled down to its lowest head-count since 1940, it's going to become even more difficult to back-up hollow threats and false red lines.

Once again, the market stumbled into the close and while the major indices weren't off much, the way we close is infinitely more important than how we open. Although on that note, the market looked vulnerable at the open yesterday. In fact, it feels like stocks are mostly marking time for the next round of key economic data releases. The irony is that when there is such news, it will come with the caveat about weather, perhaps leaving more questions than answers. Nonetheless, investors need to chew on that information and need to find a spark.

Much is being made of the moves in stocks like Tesla and Netflix, and there will no doubt be investors that will never forget the heady days going into the massive crash, but this isn't the same thing, although I think Tesla is overvalued. There aren't more than 300 publicly traded companies that will be bankrupt a year from now, though many could be trading much lower. I've tried to keep the high Beta stuff off the Hotline, which is why we've featured Tesla five times since 2010, all on the Swing service, but investors need a couple of grand slams to make their portfolios sizzle.

The thing is those gigantic wins don't have to happen in a flash. Be that as it may, finding screaming value ideas is harder, but also remember as fundamentals change it's possible for a stock that's already made a big move to be cheaper than it was before. I listen to you guys every day, and I listen to the so-called experts that never speak to real-people with real -hard-earned money in the market, and you are not giddy or overly confident. You know stocks can move lower and aren't buying every dip (as if most people could anyway).

It's not 1999, even though there are a few individual names enjoying a perfect storm, and wearing out their party shoes, and the nerves of pessimists and shorts.