If the Massive Solar Flare of 1859 (the "Carrington Flare") Happened Today... 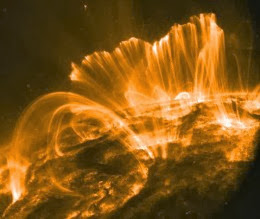 Would all our devices crash?

Let me preface this Chicken Little article by noting that I thought the Y2K hysteria was silly, and 2012 hype is silly too. If the Mayan calendar were so accurate at predicting catastrophe, why didn't it mention that their civilization would be conquered 500 years before doomsday?

That said, solar flares concern me. We weather most of them — even quite large ones — without serious disruption. However, we could be in trouble the next time there is a massive solar flare on the scale of the 1859 "Carrington Flare." 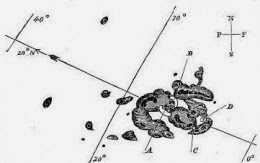 The Carrington Flare of 1859

On September 1, 1859, British astronomer Richard Carrington saw something extraordinary: amidst the usual shifting sunspots his telescope projected onto a sheet of paper, several blobs of blindingly white light grew and faded over the space of five minutes. His sketch is the earliest record of a solar flare, a rare "white light" solar flare.

The next day, the charged plasma flung out by the sun reached Earth. It lit up the entire northern hemisphere, right down to Hawaii and Rome, with vivid red, blue, green auroras. The spectacular display was covered in numerous newspaper reports, which could actually be read at night by the glow. There were also reports of magnetic disturbances: compasses went haywire during the bombardment.

More seriously, the solar storm battered the world's infant communication network. Telegraph wires burst into flames, touching off fires (while in other cases fire crews were called to fires that did not exist, due to the fiery lights in the sky). Telegraph machines scorched paper printouts, stunned operators with electric shocks, transmitted gibberish, and continued working for hours even after being unplugged from the batteries that powered them. The Earth itself was no longer "grounded"!

For two days, the light show and electromagnetic storm continued, then faded.

Carringrton and a friend were the only two people to have seen the solar flare. Carrington had trouble convincing other astronomers that the sun was the cause of the aurora borealis; after all, such auroras were most visible at night. Now we know he was right.

Modern telescopes orbiting above Earth's atmosphere have captured amazing images of sunspots and solar flares. Scientists have discovered that in addition to X-rays, gamma rays, and other energies (such as, in this case, light), some massive solar flares can eject a tremendous burst of plasma, a physical chunk of the sun's outer atmosphere, which can race through space and slam into the Earth a day or so later. Surprisingly, the hazard posed by these Coronal Mass Ejections (CMEs) is not heat, but electromagnetism: the particles of plasma carry a charge like the solar equivalent of a lightning bolt.

Major CMEs are powerful enough to challenge the Earth's magnetic field, which normally deflects charged particles towards the poles producing the Northern (and Southern) Lights.The incoming currents agitate atoms in Earth's upper atmosphere like a neon tube, causing them to glow.

Most of the time, massive CMEs miss or only strike the Earth with a glancing blow, failing to punch through. Rarely, if the magnetic fields of the Earth and incoming CME are aligned just right (or wrong), magnetic and electrical anomalies may reach the Earth's surface like a high-voltage power line falling on a street.

While Carrington was the first to guess that the sun was the cause of the Northern Lights, the aurora borealis, telegraph operators were already aware that exceptional auroras coincided with disruptions to wire communications. There were other scattered records of solar storms as well, growing more frequent as more technology registered their impact.

A May 1877 New York Times clipping is typical of news coverage of these events, giving a meticulous description of the auroras in the night sky and the way in which electrical meters at telegraph stations seemed to pick up current changes in time to the changing patterns of light in the sky. On November 18-19, 1882, another massive solar flare lit lamps, disrupted telegraph communications, and set off several fires on the Chicago telegraph switchboard, melting instruments. A November 1903 solar storm not only disrupted telegraphs and the transatlantic cable; it even shut down Swiss streetcars. Year by year, more technology felt the impact, with a particularly severe solar storm in March 1940 burning fuses and damaging hundreds of miles of telegraph and telephone networks.

By 1903, astronomers were beginning to realize that sunspots were the cause, and that solar activity seemed to intensify and wane over an 11-year cycle. However, solar storms occur even in off-years. The next "solar max" will be in 2013, close enough to set 2012 apocalypse buffs abuzz.

Two recent solar storms have caused local disruptions to the power grid: the Great Aurora of 1989 and The Halloween Storm of 2003.

On March 9, 1989, Kitt Peak Observatory spotted a major solar flare. On March 13, reddish auroras like those in the Carrington Flare reached as far south as Florida and Cuba, and shorted out Quebec's power grid. Circuits also overloaded in Great Britain, New York and Virginia. A critical transformer melted in New Jersey. Only by buying electricity from other states did New Jersey operators save the East Coast from suffering a blackout like Quebec's. Even the Space Shuttle was impacted. The Discovery, then in orbit, showed bizarre instrument readings, and the mission was nearly aborted.

In November 2003, an "X" solar flare, the strongest of solar storms, temporarily disabled many satellites, killed one satellite completely and and burned out an instrument on a Mars orbiter. The crew of the International Space Station took shelter, reporting elevated radiation readings and "shooting stars" in their own eyes. In September 2005, a string of "X" solar flares caused lesser disruptions to major power grids and knocked out the GPS system completely for ten minutes.

Last but not least, a June 7, 2011 moderate solar flare (video, above right) caused minor satellite disruption -- and I may have heard it on my phone on June 9; there was an unusual amount of static over the line for two days!

A Fascinating History of Victorian Astronomy

The Sun Kings: The Unexpected Tragedy of Richard Carrington and the Tale of How Modern Astronomy Began

This excellent book from 2007 chronicles contemporary accounts of the Carrington Solar Flare, Richard Carrington's scandal-plagued life, the lively and contentious debates of Victorian astronomy, and the successors of Carrington who finally proved and vindicated his work.

The 2003 and 2005 solar flares prove that we can weather quite massive solar flares with only sporadic damage, but the Quebec blackout of 1989 is a wake-up call. The whole east coast grid nearly went down in that solar storm.

There are three things to worry about:

·         Power outages. Severe solar storms are similar to the EMP of a nuclear detonation. A multi-state power outage, especially one that lasts many hours, could cause major disruptions.

·         Temporary disruption of communications. GPS devices (used by airplanes and ships for navigation), radio, wireless and wired communication could all be disrupted so that we could not pass or receive signals. This would be especially bad for emergency and utilities services racing to deal with problems. People trapped in elevators would be vulnerable, as there would be no way to call for help.

·         Actual damage to wires and electronics. Our computers and devices might experience glitches, but would probably suffer no permanent damage. Satellites are more vulnerable, lacking the protection of the atmosphere, although the Earth's magnetic field extends out far enough to offer them some protection. Also, what about nuclear power plants?

The most serious risk is that ground-based power lines, which already have a lot of current running through them, could burn out and suffer widespread damage that might take months to repair. A multi-hour blackout over several states is a major inconvenience. Widespread damage to the world's power grid would be a more serious disaster, disrupting food transportation and storage, the global economy, fuel supplies, hospitals, and other essential services. We could be dependent on emergency services working under difficult circumstances for an extended period of time. That's the worst-case scenario that doomsday buffs get excited about. It's unlikely, but a solar flare as large as the 1859 event could do it.

Continuous solar monitoring by satellite and earth-based telescopes is vital to prevent a solar storm catastrophe. When scientists observe massive solar flares, they report them, which gives us at least a full day before the CMEs reach Earth. Power companies and satellite operators are following NASA's solar weather reports. By powering down transmission lines and satellites ahead of time, power companies can partially mitigate the impact of voltage spikes caused by the solar storm.

At least, that's the hope. Unfortunately, it sounds like this system is not entirely ready. A 2010 Grid Reliability and Infrastructure Defense Act of the U.S. Congress predicts that it may cost $100 million to protect the United States' power grid against solar EMPs. Without that protection, Congress estimates trillions of dollars in damages and 4 to 10 years to recover, should a Carrington-scale event catch us unprepared.

Bottom Line: What Are the Chances of an 1859-Style Flare?

Most massive solar flares do NOT send us "back to the stone age," as the doomsayers warn. We've weathered some powerful solar flares in 2010-2011, and we'll weather many more with little or no disruption. Just how likely is it that we might get hit with a dangerous CME as big as the 1859 flare, and how seriously should we take warnings and precautions?

As one scientist puts it, "Extreme events like the 1859 Carrington Event are 1-in-100-year probabilities, about the same probability as a storm of the level of Katrina hitting New Orleans – and New Orleans did not build their defenses to withstand the extreme-but-unlikely magnitude." ~ Dr. Ruth Bamford, quoted in this Telegraph article

That is, we should treat the risk as we would the risk of major earthquakes or other unusual disasters: an individual's chances of being in one are slim, but they happen sooner or later, and we don't want to be caught unprepared.

Links / Bibliography for this page

·         'Old Faithful' Sunspot Keeps Spouting Off Big Solar Flares | Solar Flares & Coronal Mass Ejectio
First week of September 2011, a sunspot has produced multiple massive solar flares, including an X-flare. It's good to remember that many massive flares don't reach mainstream media because they do NOT cause widespread damage!

·         2012: No Killer Solar Flare | Universe Today
How the Earth's magnetosphere and atmosphere shield us from solar flares, even nasty ones, and why we don't have to worry about a "killer" solar flare.

·         SolarStorms.org: Excellent website on solar flares
Solarstorms.org is an in-depth site with hundreds of newspaper clippings and records of past solar storms, including many more than those mentioned here. I consulted this site extensively.

·         150 Years Ago: The Worst Solar Storm Ever | Space.com
News site Space.com covers the Carrington flare and modern measures which we hope will mitigate the disruption caused by massive solar flares.

·         Solar Shield--Protecting the North American Power Grid - NASA Science
(Oct 2010) A new NASA project named "Solar Shield" could help keep the lights on... but it's not ready yet.

·         Nasa's 2013 solar flare warning: how much should we worry? Telegraph Blogs
The UK's Telegraph Newspaper sifts through recent 2012 hysteria to examine just how much we need to worry about flares during the approaching solar maximum.

·         Could a solar storm send us back to the Stone Age? - CSMonitor.com
CSM's somewhat apocalyptic article on a possible massive solar flare suggests computer hard drives and other equipment could suffer real damage, in addition to the threat of power outages.

The Northern Lights from the International Space Station