Of Armies and Libraries: The End of Western Civilization

Of Armies and Libraries: The End of Western Civilization 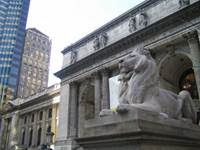 Two news items have flashed across my eyes in the last few days that appal me.  One is that the United States plans to reduce its armed forces, the men and women who protect all of us from enemies all around the globe, to pre-World War II levels.  The second is that New York City was planning to transform the big Public Library on Fifth Avenue-the one with the lions in front-into a lending library and somewhat glorified internet café-the seven stories of ancient and modern books, one of the greatest research collections in the world-to be sent into cold storage in far-off New Jersey.

We all should know from history that a principal reason why the United States did not react to the threats increasingly manifest to its security and that of its closest allies during the 1930s-and why it took so long to get into action properly after Pearl Harbor at the end of 1941-was that the Army, Navy, Air Force and Marines were woefully undermanned and lacking in adequate arms.  Nazi Germany and Imperial Japan took advantage of American inability to defend itself.  Today, as the Putin threaten another Crimean War, the Middle East (for all its vaunted Arab Spring) is more unsteady and volatile than ever, North Korea and Iran posture and pose real dangers as nuclear powers, Syria commits atrocities beyond imagining and falls into the hands of Al-Qaida--and thus all around the strategic map where there is a need for flexibility rather than total reliance on huge technological systems and miniature unmanned drone-like weapons.  We have known that for a long time that the United Nations has become worse than a farcical house of racist palaver: it is a source of potential-and often enough, very real-provocations to anti-American, anti-Western and anti-Israeli actions.  The European Union, Nato and other international alliances are stymied by their own petty squabbles and mental blocks.  Without a strong, alert and multi-layered United States military, what hope is there in the world?

And so to the New York Public Library, though this is a story that seems t6o have broken in 2012 and was settled in the next year, the very diea remains a possibility-and this is what frightens me.  In the days of electronic-readers reductivity of books to mere information and digital technology, surely the breakdown of one major collection would be a sign of the collapse of knowledge, study and understanding as it has been built up for the past several millennia.  What comes next, the closing down of the Metropolitan Museum of Art, the Museum of Modern Art, the Bronx Zoo, the Botanical Gardens-in brief, the end of New York as one of, if not the, greatest city in the world...that history has ever known?  This would be the triumph of Philistinism, managerial and sociological jargons and political know-nothingism, and the phantasmagoria of celebrity and narcissism that is popular culture.

Like a large, strong and flexible military, a strong array of cultural institutions-public and private, to be sure-does more than symbolize the power of western democracy; it embodies the will and the commitment of the nation-and all the nations of the world committed to civilized values-to protect itself and to preserve and enhance its multi-cultural heritage.  A research library moreover does more than store knowledge: it is a center for research, a mine of valuable objects-manuscripts, stone tablets, incunabula, and precious first editions.

It is quite a different thing to read an electronic text on a machine and to hold a heavy well-bound volume, with all its marginalia, illustrations, and other paraphernalia.  A book is valuable for its own history: who commissioned it, printed it, read; what diverse materials it contains and who read it before; how early owners responded with comments and pictures and where it has travelled from place to place indicated by ex libris seals, personal signatures and library stamps.

There are other large research libraries, to be sure, both in the USA at great universities, and overseas, such as the British Museum in London or the Bibliothèque in Paris, but no two ever have the same exact collections and so the loss of any one is a major disaster, perhaps equal to the destruction of the Ancient Library in Alexandria or the sacking of Second Temple archives in Jerusalem.  But in our day and age, the running down of the New York Public would be a symbolic crisis, a signal of the loss of faith in intellectual strength, just as the downsizing of the armed forces will be.