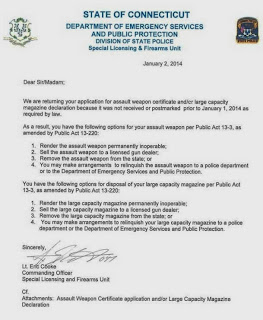 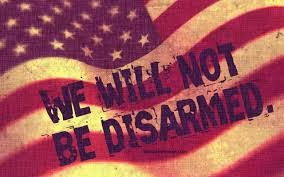 Liberals often like to speak about the repression exhibited by Republican positions on social issues and the like. But the reality is that the Democrats are the real danger to our freedoms, and it’s about time liberals recognize that. If their politicians are willing to act like the Bill of Rights and the Constitution mean nothing, then how secure can they really be that they won’t attack the rights they care about when they are done with us?

Here’s evidence of what Democrats do to our Rights. The people of Connecticut have elected one of the more liberal governments in the country, and recently their state has decided to go full throttle towards fascism and away from our Constitutional principles.

The people of Connecticut who were late turning in their gun registration paperwork will have to turn in, destroy, sell or leave the state with their firearm – or face the full weight of the law.

Those who fail to do so could face serious criminal penalties. Once people realize they can’t keep the guns and magazines, they’re going to get rid of them, Michael P. Lawlor, the undersecretary for criminal justice policy and planning to Gov. Dannel P. Malloy, says.

This is purely and simply gun confiscation. The people of Connecticut have lost their right to bear arms without the interference of the government.

What has happened to America where her citizens will voluntarily turn over their rights to the government?

Even worse – the news media, who should be fighting to maintain our freedoms, has gone in to full state media mode. Just read what Connecticut’s largest and most important newspaper recently wrote about violators of the new anti-gun law.

Although willful noncompliance with the law is doubtless a major issue, it’s possible that many gun owners are unaware of their obligation to register military-style assault weapons and would do so if given another chance.

But the bottom line is that the state must try to enforce the law. Authorities should use the background check database as a way to find assault weapon purchasers who might not have registered those guns in compliance with the new law.

The very reason people were afraid of gun registration is what the newspaper now supports using to ensure that the laws aren’t being broken. This is why 2nd Amendment supporters make stands against gun registration -- because it gives the state the power to control us if they ever decide they need to … and now the Connecticut media has made that decision for the government. It’s disgusting.

Wake up America. This is the liberal anti-freedom agenda and it is coming for us all.