Why Did The North Caucasus Insurgency Fail To Attack Sochi Winter Olympics? 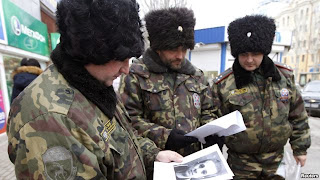 In central Volgograd, Russian Cossacks look at portraits of people suspected of involvement in terrorist acts.

The two suicide bombings on consecutive days in late December targeting public transportation in Volgograd compounded existing fears both in Russia and abroad that the North Caucasus insurgency posed a major security threat to the Winter Olympic Games to be held in Sochi in February. Self-styled Caucasus Emirate leader Doku Umarov had called on his fighters in an appeal posted online last July to use “any methods Allah allows” to prevent the Games from taking place.

The Sochi Olympics have now ended without any such bloodbath, despite the threat of “surprises” for those attending the Games by two men identified as the Volgograd suicide bombers in video footage posted on the Daghestan insurgency website on January 19.

So was the insurgency deterred from staging a major attack in light of the unprecedented security measures? Were the losses it has sustained in recent years so great as to render a major attack impossible?  (According to the website Caucasus Knot, the insurgency lost 404 fighters in 2012 and a further 298 in 2013). Or was the decision taken to harbor resources and manpower in order to perpetrate attacks on other targets where security is more lax and the chances of inflicting serious damage concomitantly greater?

True, security measures for the Games were unprecedented, encompassing 70,000 police and security forces. But even so, the third explanation is the most plausible. It should be borne in mind that the insurgency never regarded disrupting the Olympics as an end in itself. On the contrary, it is engaged in a long-term campaign to compel the central Russian government to withdraw its military presence from the North Caucasus:  any operation to disrupt the Winter Olympics would have been just one battle in that campaign.

Two recent statements by different insurgency groups suggest that suicide bombings across the Russian Federation will be a primary tactic in that ongoing struggle. A hitherto unknown group calling itself Ansar al-Sunna that claimed responsibility for dispatching the two suicide bombers to Volgograd warned in a statement addressed to “Russia’s crusaders,”  “attacks like those carried out in Volgograd were just the beginning of your sufferings, if you do not come to your senses and take your forces back from the lands of the Caucasus. Otherwise, the attacks will continue, including chemical [ones], if Allah wills it.”

That statement goes on to warn that “every region, every city, street, district -- we shall fill your homes with blood!” in retaliation for the sufferings Moscow has inflicted on the Muslims of the North Caucasus. It stresses that “each one of our warriors is waiting for the order from his amir [commander] in order to blow up your peace and calm the way it happened in Volgograd.”

A similar statement by the Information and Analysis Service of the Daghestan insurgency wing affirms that “today one mujahed can destroy tens, or even hundreds of people in your cities. And do not think that those losses will be imperceptible for you. The quantity of these explosions will only grow, and they will reach many of you.”

Where and when the next attack(s) might take place is impossible to predict.  Also unclear is whether Ansar al-Sunna does indeed have chemical weapons at its disposal to use against the Russian population. One U.S.-based analyst has suggested that militants from the North Caucasus fighting in Syria might have acquired such weapons from looted Syrian government stockpiles, although he acknowledges that transporting them to Russia would not be an easy matter.