France's Hollande steps in to calm row with Morocco

France's Hollande steps in to calm row with Morocco 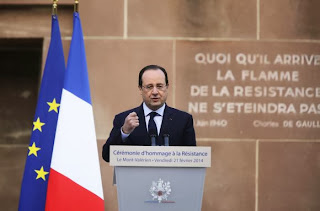 French President Francois Hollande delivers a speech as part of a ceremony in homage to the World War II French Resistance at the Mont Valerien memorial in Suresnes, near Paris, February 21, 2014 file photo.

PARIS (Reuters) - President Francois Hollande telephoned the king of Morocco to try to calm a rare diplomatic row between France and its former colony about allegations of human rights abuses.

In one of two incidents that upset Rabat, French police went to the Moroccan embassy in Paris seeking to question the head of the domestic intelligence over torture allegations, following lawsuits filed against him in France by Moroccan activists.

Rabat summoned the French ambassador on Saturday in protest.

Paris initially played down the police action over the lawsuits as "regrettable", but Hollande stepped in personally after Morocco postponed a planned trip by his climate envoy.

"The president wanted to send a message of confidence and friendship to Morocco," a French diplomatic source said of Hollande's telephone call to King Mohammed VI on Monday. "The misunderstandings have been cleared up."

Diplomatic spats are rare between France and Morocco, a strong ally which has faced criticism from rights groups over police abuses, press freedom and judicial independence.

French newspaper Le Monde quoted Bardem as telling a Paris news conference on February 17 that a French ambassador had told him that "Morocco was a mistress with whom we sleep every night even if we aren't especially in love with her, but that we must defend. In other words, we turn a blind eye."

A foreign ministry official denied that the ambassador had made the remarks.

Hundreds of demonstrators protested outside the French embassy in Rabat on Tuesday, chanting: "Ambassador coward, Morocco cannot be humiliated."

France has long supported Rabat's position on Western Sahara due to historical and business relations, despite allegations by rights groups that Morocco uses excessive force against demonstrators and activists in the region.

In December, Hollande was forced to apologize to Algeria after joking at a dinner with the CRIF Jewish organization that his interior minister had been lucky to return safe and sound from an official visit to Algiers.